Much of the history of the Rivermead Lodge is not actually written down. Therefore, this site is the first attempt to document that history, which means so much to all the members.

Many of the Founders of the Lodge were actually London Masons. These London Masons were frequent visitors to the Lodge of Rectitude 5882, which met in what was then the Province of Kent. These London Masons decided that they wanted to form their own Lodge to meet in the Province of Kent. A new Lodge has to have a sponsoring Lodge. It was, therefore, a natural choice that the Founders' friends in the Lodge of Rectitude should have agreed to become sponsors of the Rivermead Lodge. Therefore, on Tuesday 15 October 1968, at its Installation Meeting, the Lodge of Rectitude formally considered and approved the request to form a new Lodge. A copy of the summons for this meeting can be viewed by clicking here. Following this meeting, fourteen of the Founders signed the Petition. The signatures can be seen here, while the Petition can be seen here.

The Founders wasted no time and three days later the "Founder Secretary", Harry Jennings, wrote to the Provincial Grand Secretary, enclosing the Petition. The letter, which can be read here, gives the reasons why the Founders wished to form the Lodge. There are three proposed names for the new Lodge in the letter and are requested in the following order of preference, "Thamesmeade, Thamesreach and Rivermeade", the reason being given as follows: "these names are a particular area in North West Kent where quite a few of the founders grew up together in their earlier days and, of course, is very sentimental to them".

You might have noticed that the requested name of "Rivermeade" finishes with the letter "e" but the Lodge was actually consecrated as "Rivermead". Why this should have happened is, perhaps, lost for ever in the mists of time. The best guess is that there was a misspelling on the Petition, which ultimately determined the name of the Lodge.

As discussed above, the Lodge name was not initially intended to be "Rivermead" but rather "Thamesmead" Lodge and the original Lodge Crest was designed accordingly. Unfortunately for those Founders, they were just pipped to the post by other equally determined and motivated Brethren, who managed to have their claim on the name recognised first. It was a close thing. While the Rivermead Lodge has the number 8278, Thamesmead Lodge has the number 8269.

So it was that the Lodge was consecrated at The Masonic Hall, Cromwell Avenue, Bromley on 3 October 1969 (when the Lodge web writer was 10 years old!). A copy of the order of business for the Consecration Ceremony can be viewed here. Fortunately, the Consecration Certificate has been preserved and can be seen in the picture to the left (click for a larger image). The Provincial Grand Master of the Province of Kent at the time was Lord Cornwallis, whose signature can be seen at the head of the document.

Opening a Lodge naturally carries a number of expenses with it. Often, therefore, Lodges will purchase and dedicate a banner some time after the Consecration date. This was equally so with the Rivermead Lodge, whose Banner dedication took place on Tuesday 22 January 1980. The Dedicating Officer was the Provincial Grand Master of the Province of West Kent, the Rev Peter Churton Collins. A copy of the order of business for the Dedication Ceremony can be found here.

An examination of the Consecration Certificate reveals that one of the Assistant Provincial Grand Masters of the Province of Kent, who officiated at the Consecration, was the very same Rev Peter Churton Collins (click on image for a larger picture).

Lodge banners come in many shapes and sizes and there is no uniform pattern or design. All banners will bear the relevant Lodge crest and will generally depict items of relevance to Freemasonry.

The Rivermead banner (click on image for a larger picture) displays the Lodge Crest and consecration date. The box at the bottom contains the names of the Founders. The black and white floor represents the flooring used in a Masonic Temple. The two pillars represent the pillars, which the Bible tells us were placed at the entrance to King Solomon's Temple. These pillars are always depicted within a Masonic Temple.

As with all Lodges, Rivermead Lodge set out its by-laws, which must be approved by Provincial Grand Lodge and Grand Lodge.

To the left can be seen a booklet containing the original Lodge by-laws. Click on the image to see a full size copy. Rules 6 and 7 are interesting as regards the various fees in 1970. The by-laws are shown as having received approval on 16/7/1970. These must, therefore, be the original by-laws. A small document but historically significant.

The Lodge has always met at the Westwood Masonic Centre in Welling. Ritual is an important part of Masonic ceremony. Just as an amateur dramatics group would never put on a play without rehearsing, a Masonic Lodge would not attempt to conduct a ritual without making sure that everyone knows what he is required to do. Therefore, Lodges form a Lodge of Instruction (LOI) to enable the Lodge officers to perfect their roles to the best of their ability. The Rivermead LOI meets at the Masonic Centre  in Welling, the same location as the Lodge itself. This, however, was not always the case. The formation of the LOI was approved by the Lodge on 23 March 1971. An early copy of the LOI by-laws shows that the original meeting place for the LOI was the Ravensbourne Hotel, Catford. You will already have seen above that the Founders had been meeting there. The original meeting day was Wednesday. It can, however, be seen that the day changed to Tuesday when the LOI moved to the Coach and Horses Public House in Lewisham. This has been amended by hand in the by-law booklet, which can be seen by clicking on the cover to the left. As the Lodge continued to grow in size and strength, it outgrew the accommodation and the Lodge of Instruction moved to the Westwood Centre, where it continues to meet to this day.

It is always difficult to measure success and no Lodge can ever be complacent about the future. That said, it must have been with great pride that the Lodge held its 21st anniversary Installation meeting.

The booklet produced to celebrate the event can be seen to the right and the full document can be obtained by clicking on the image. It is interesting to see various names and positions held all that time ago.

The next anniversary celebration marked 50 years since the consecration. This took place place in 2019 and details can be seen here. 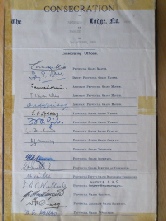