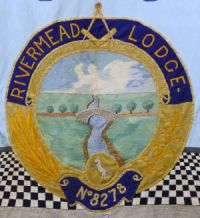 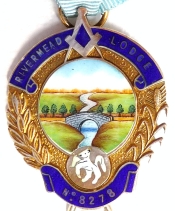 All Lodges have a Lodge Crest, which is unique to each individual Lodge. Lodge Crests are designed as part of the process of planning for the consecration of a new Lodge.

The history of the founding of the Lodge can be found on the Early Days page. Here there is an opportunity to see how the Lodge Crest appears on the Lodge Banner (picture right).

Most Lodges also have a depiction of the Crest enamelled and used to create Past Masters' Jewels, which are presented to Brothers, who have passed through the Master's Chair. To the left is a picture of the beautiful enamelling on a Rivermead Lodge Past Master's Jewel.

The Lodge Crest was designed by a Mr Don Noble, who, although not a Mason, was the brother of one of our Founders, W.Bro Bob Noble.

When the Lodge was unable to adopt its name of choice (see Early Days), it took the name "Rivermead". The logo was changed to depict a river crossing a field ("mead" being an old English word for "meadow").

Everything on the Crest has a meaning. The Square and Compasses at the top are well known Masonic symbols. The horse is the White Horse of Kent. To the left of the logo is a sprig of acacia and to the right an ear of corn, both of which are relevant to Masonic rituals.

Research has discovered an anomaly as regards the picture of the field. The original lithographic stamp (see History) depicts 7 oaks. The Banner above depicts 6 oaks while the Past Master's Jewel depicts 8 oaks. While no records exist of the design process, the best guess is that the original design was intended to make reference to "Sevenoaks" (a town in Kent), a point which was lost on the manufacturers of the Banner and Jewel!