10 November 2018 saw W.Bro./E.Comp. Michael Herschell (pictured below), a Past Master of Rivermead Lodge, installed into the First Principal's Chair of Erdemont Chapter 5865. Nobody had any idea that Michael would not be with us for the next Installation in 2019. 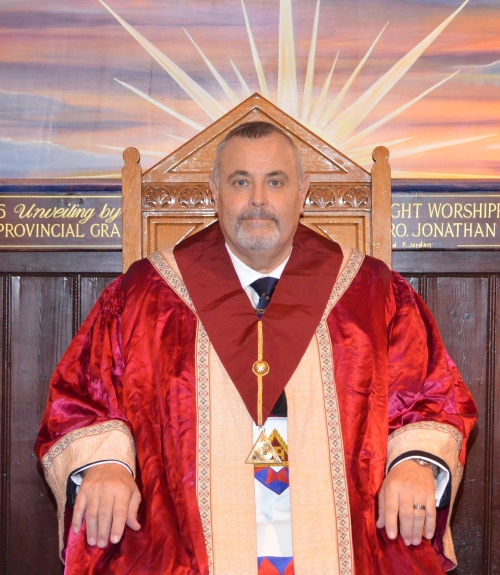 Michael passed away on Friday 18 October 2019 after a brave although short battle with illness. We can pay tribute to Michael with a short account of his Masonic career and we can give some idea of how much he meant to us.

Michael's Masonic career had a slightly different start to many as he joined at a relatively young age. His late father, Brian, who also passed away far too early, was a Freemason and became a Founder of a Lodge in West Kent, Rivermead Lodge 8278.

The Lodge was consecrated in 1969 when Michael was 11 years old. That was a bit too young to join but there's little doubt that both looked forward to the day and so it was that on 27 May 1980, at the tender age of 22, that Michael was initiated into Rivermead Lodge. As Michael subsequently confirmed, this was something of a daunting prospect. He joined a group of much older strangers and many might not have been up to the challenge but, with the support of his father, he rose to it and not only became an integrated member of the Lodge but became Master of the Lodge 1989.

Of course, work and family commitments were significant for Michael and time became an issue and so, in 2000, Michael took a break from his Masonic activities but never lost his liking and commitment for the Order. In 2012, a member of the Lodge embarked upon a particular task and almost accidentally happened upon Michael, who tentatively suggested that he would like to attend meetings again.

Michael returned and immediately took up where he had left off. As a senior member of the Fire Brigade he had the management ability and strategic vision to be able to deal with the more difficult aspects of the functioning of a Masonic Lodge. He was immediately appointed as Lodge Mentor, a responsible position held by someone, who can do as the title suggests, mentor everyone and be a friend and guide to all. This led on to appointment as Lodge Almoner, a difficult and demanding role. The incumbent has to make sure that the welfare of every member and widow is monitored and managed. It's a role that requires commitment and sensitivity. Michael absolutely embodied these qualities. It would not be appropriate here to give specific examples but it can be said that Michael managed some very difficult and sensitive matters and always ensured a positive outcome.

His caring manner and simple hard work endeared him to everyone. His conduct was recognised with an early Provincial promotion to Past Provincial Junior Grand Deacon. Although Michael, on paper, did not hold the highest rank in Rivermead Lodge, he became the "go to" person for the resolution of difficult or sensitive issues

As if this were not enough, Michael enjoyed his clay shooting and so joined the Lodge of Sincerity, a Lodge themed around shooting, in April 2017. Of course, it was never Michael's way just to take part in some shooting activities and he was immediately appointed as Almoner of this Lodge and, in October 2018, as Secretary. Secretary is a most demanding role and members are not appointed lightly to this office. It is very clear why Michael was chosen. You could even say that we were exploiting his talents but there was also an element of not being able to keep Michael down.

In 1985, Michael had become a Companion of the Holy Royal Arch. Having returned to Craft Masonry, Michael re-joined the Holy Royal Arch as well. Having joined Erdemont Chapter in 2014, he was immediately appointed to one of the more challenging roles as regards the study of ritual and then the obvious happened. Michael excelled and in 2018 was appointed as First Principal (the "chief officer" of the Chapter). Sadly, Michael was not to see his full year out but it is a matter of great satisfaction to every member that, forevermore, Michael's name will be on the list of First Principals of the Chapter.

Michael also joined the Mark and Royal Ark Mariner Degrees and his colleagues were poised there to propel him forward with the same speed and enthusiasm as elsewhere.

Holding office is one thing. Those of us from the uniformed services are familiar with the term "uniform carrier". They exist in all walks of life. Michael would not have known how to behave in such a way. For Michael, the seemingly easy option was never the easy option. The only option was to empathise and to treat everyone with dignity and respect and provide appropriate assistance wherever possible and not to rest until that help was provided.

Within Michael's Masonic circle, there has been a genuine outpouring of grief. It's always sad to lose a Brother or a Companion but so many of Michael's Lodge and Chapter members have lost a true and dear friend. In every vision of the future, Michael loomed large in all senses of the word and it is now very hard to look or plan forward without seeing him there.

His Lodges and Chapter will continue, indeed, Michael would have been very alarmed if they did not, but Michael's loss is being felt very deeply. Michael has left such a void that it's hard right now to see how it can ever be filled. There are two frequently quoted pieces of Masonic ritual and neither could be more fitting regarding Michael. The first piece reminds us that the main object of life is not to seek riches or high office but that far more important is that a person should "live respected and die regretted". The second reminds us that one of the best things that can be said about anybody, who passes on, is that "it is well finished". Both observations could not apply more to Michael.

As a friend and a Brother, we shall all be privileged to see his like again. 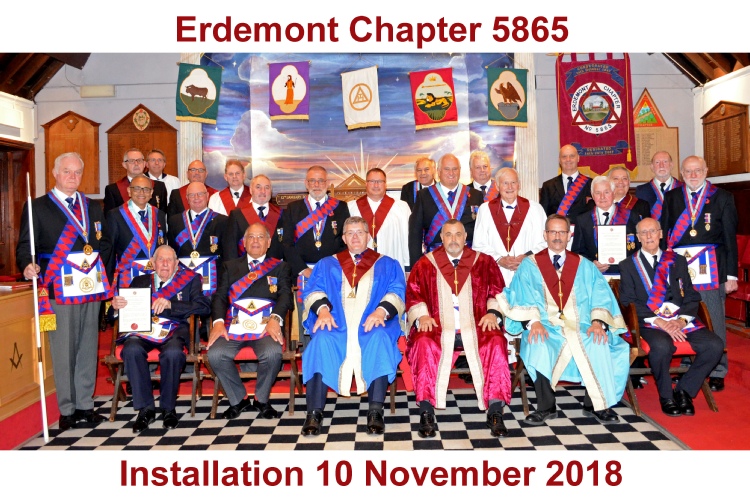